Between the stresses of deadlines to meet, traffic jams, financial obligations etc. it’s easy to forget the importance of taking some time out to enjoy a few chuckles with your special someone every now and then. Here are some Funny Marriage Quotes that give you both a glimpse of the lighter side of marriage.

“I was married by a judge. I should have asked for a jury.”
-Groucho Marx

“The best way to remember your wife’s birthday is to forget it once.” -H.V. Prochnow

“I have learned that only two things are necessary to keep one’s wife happy. First, let her think she’s having her own way. And second, let her have it.” -Lyndon B. Johnson

“A man’s wife has more power over him than the state has.”
-Ralph Waldo Emerson

“My husband and I divorced over religious differences. He thought he was God, and I didn’t.” -Unknown

“My wife and I were happy for twenty years. Then we met.”
-Rodney Dangerfield

“Getting married is a lot like getting into a tub of hot water. After you get used to it, it ain’t so hot.” -Minnie Pearl

“Behind every great man there is a surprised woman.”
-Maryon Pearson

“They say love is blind…and marriage is an institution. Well, I’m not ready for an institution for the blind just yet.” -Mae West

“Bachelors know more about women than married men; if they didn’t they’d be married too.” -H.L. Mencken

“A man is incomplete until he is married. After that, he is finished.”
-Zsa Zsa Gabor

“I haven’t spoken to my wife in years. I didn’t want to interrupt her.” -Rodney Dangerfield

“No married man is genuinely happy if he has to drink worse whisky than he used to drink when he was single.” -H.L. Mencken

“A wedding is just like a funeral except that you get to smell your own flowers.” -Grace Hansen

“If nature had arranged that husbands and wives should have children alternatively, there would never be more than three in a family.”
-Lawrence Housman

“Can you imagine a world without men? No crime and lots of happy, fat women.” -Marion Smith

“Why does a woman work ten years to change a man’s habits and then complain that he’s not the man she married?” -Barbra Streisand

“My mother once told me that if a married couple puts a penny in a pot for every time they make love in the first year, and takes a penny out every time after that, they’ll never get all the pennies out of the pot.” -Armistead Maupin

“Marriage has no guarantees. If that’s what you’re looking for, go live with a car battery.” -Erma Bombeck

“I came from a big family. As a matter of fact, I never got to sleep alone until I was married.” -Lewis Grizzard

“There’s a way of transferring funds that is even faster than electronic banking. It’s called marriage.” -James Holt McGavran 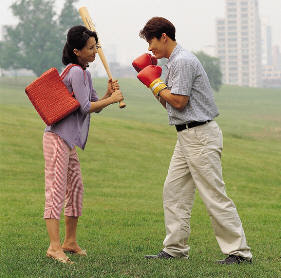