With Michael Irvin first to go, it came down to Aaron Carter and the “Iron Chef” host Mark Dacascos. Unfortunately my idol iron chef Mark Dacascos and his professional partner Lacey Schwimmer, who missed Monday night’s performance episode because she was sick with the flu; were then ousted after competing in a special “Dance Off” with singer Aaron Carter and partner Karina Smirnoff.
Mark and Lacey did great with their performance. I think Mark is a better dancer than Aaron Carter. Well, I guess I’m not gonna watch the rest of this competition because my idol was already out. 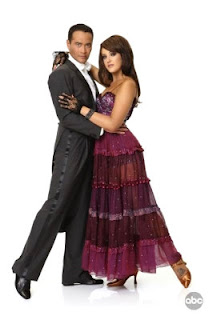