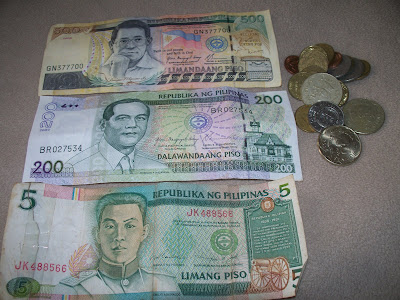 This Philippine money are not in my possession now because my boss took it and add it to his different currency collection. The five hundred pesso (P500) and the coins that was his when he visited to the Philippines, the old paper 5 pesos I gave that to him and the Php200 paper bill that was mine as my decoration in my wallet just to have something in my empty wallet. But when I arrived here in the US he took with the $11 left in my wallet. In other words he emptied my wallet and left me nothing. I tried to take back from him but he didn’t want too. He said that’s his. We are opposite with other couples because what’s mine is his and what’s his is his alone. I don’t want to make any trouble because it will surely resort to a big fight. I also don’t like to fight when money involves because he is not gonna give up on it. Well, i just missed to have money in my wallet though spend it like crazy. 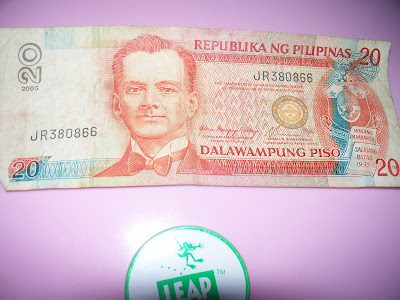 And Ohh i still have this 20 peso bill in my wallet because i secretly took it back before. This is my sister’s gift as payment for getting married ahead of me. She only paid me 20 peso because she is cheap you know hehehehe. It’s Filipino tradition to pay the older siblings when the younger once got married first to block the bad luck. They had to pay so that the older sibling who is single will also get married and not end up an old maid or Spinster. I don’t know if this also works on boys since they are the one courting the girls and finding a wife is not that big of a deal with them.

Alright guys, visit the pretty host and the rest of the Nostalgia famil by pressing the buttons.

u may view mine too here

wow mommy shy! the 20 pesos payment really did work because you have gotten married. =)

i collect banknotes and coins too and i don’t have a complete set of Philippine banknotes. Nagagastos kasi. hehehe

Hayaan mo na lang yun, hindi naman malaking halaga ang mga perang kinuha sa iyo. Siguro souvenir items yun para sa kanya. Try to commit him to the Lord so that the Lord will change him for the better. Nothing is impossible with God. Thanks for the post. God bless you all always. 8-) 8-) :inlove: :blush: