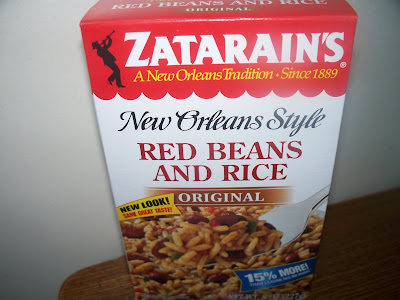 Joedub used to have a bunch of this food when i arrived here in US.  He said he stole it from his friend’s apartment who was about to moved out and asked them to help clean out his pantry.  I don’t really like this food but it was alright and easy to make.  I tried to make this red beans and rice last weekend but my dragons didn’t like it.  Well, justine sort of like it because she ate a lot but Jake doesn’t.  Joe didn’t eat too so Justine and I had to finish the whole plate.
Red Beans and Rice is a Monday tradition throughout South Louisiana, but particularly in New Orleans. Years ago, before the age of automatic washing machines, Monday was wash day—which made it a good day to slow simmer a big pot of beans on the stove. And Sunday’s ham yielded a mighty fine ham bone that gave the beans a heavenly flavor … well … that’s how traditions are born.

Beans served over rice added up to a great source of protein in the days when many families couldn’t afford meat regularly. A pot of beans could feed lots of people.