The church where we (all my sisters and bros) got baptized, received first communion, confirmation, Flores De Mayo and attended our Sunday masses and other spiritual and religious event.

I used to play volleyball in this area. This is the plaza where different sports event being played like softball, baseball, soccer, volleyball, basketball, and even party event. Every Christmas time the Del Monte company will give away cans and boxes of pineapple and other goodies to all Del Monte employee. Kids also had their own kiddies stuff to received every Christmas. It was also in this area where carnaval is held during fiesta.
I never thought this kind of bathroom still existed in that place. The higher rank you have the better facilities and house you will get. So, supervisors and employee with high rank live in the better house with bathroom inside. While those regular employee they live in a house with the bathroom outside. This was the kind of bathroom we used before. We moved to a better house when I was in college already. I remember we had to be careful and vigilant in taking a shower as there were and still are today some boys peeping around. My parents built an extension in our old house for bathroom though so that we won’t get victimized by this pervert. Aside from that, if we forgot to locked our CR, some neighbors will used it and leave their crap behind not flushing it.
This was our last picture taken in this place. It was our last Christmas when my parents didn’t let us to go on Disco and hanged out with friends. I was tomboy-ish when i was growing up and my parents had trusted me for they know i wasn’t attracted to any boys. But when my sisters started having crushes and admirers that leniency they gave to me was gone. Anyhow, we moved out from this place early dawn after New Year’s Eve (1998).

Lots of wonderful memories I had in this place. I got these photo from my sisters FB. She went to the Philippines last May and visited our old place during the town Fiesta 2010. Babger and I tattooed our names to our body. I had my name in his arm and his name in my ankle. The tattoo started when we were just talking random topic over the phone. We were still friends then and I happened to mention that I want a dolphin tattoo. I was planning to have a tattoo but it’s expensive. At that time I was bored in life and a little feel bitter with life. I always had this attitude of inflicting pain to myself to see if I am human or just want to check if i still feel pain. I didn’t realize that babger considered tattoo too. So, to keep my word I also had his name tattooed in my body when he visited me. 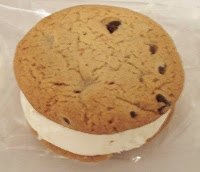 I can’t believed what i saw in the grocery bags that my dear babger had shopped. A pack of ice cream sandwich, two packs of Popsicle, anda pack of ice cream bar.  he stock our freezer with all this ice creams for cold season.  How weird was that?  Sometimes, he missed eating lunch and have popsicle instead.  This morning i woke up with a little bit of frost on the ground.  It means it’s getting colder and freezing over here but my dear husband is at the kitchen hiding from the dragons while munching some ice cream and popsicle.